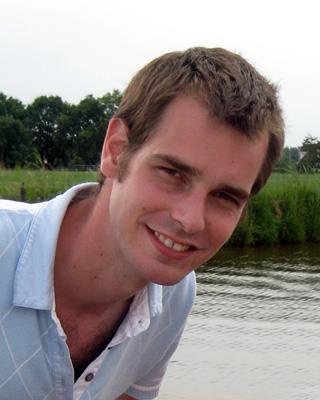 What do you do at Triangle Studios?
I do 2D graphic design, a lot of Graphical User Interfaces

What education did you have?
I first did Graphical Design and then Communication and Media Design

How do you live?
I live with my girlfriend. We also have a dog called Elvis.

Why are you working in the gamesindustry?
I’ve always played video games, so when the opportunity came along I went with it.

What are your favorite games?
Love the Zelda and GTA franchises, Transport Tycoon, The Settlers, the Broken Sword games.

What’s the worst game you ever played?
Anything turn-based actually. If I’d want that I’d just play a board game.

If you could play one game again for the first time, what game would it be?
Definitely The Legend of Zelda – A Link to the Past. Hands down.

Favorite music?
Let’s just say pop music. Lots of different styles though, like rock, disco, old jazz, but I’m not a fan of a specific genre. If I really had to name some artists I’d go with Michael Jackson, Frank Sinatra, Adele and Robbie Williams.

Other important things people need to know about you?
Nope.

Why Cross of the Dutchman?
I love the graphical style of the game. Another thing I really like is that it takes a true story and makes it into a great entertaining product.

You’re walking through the forest when a magical fairy appears in front of you. She grants you the superpower of your choosing. What shall it be?
Magnetos powers from Marvels X-men.