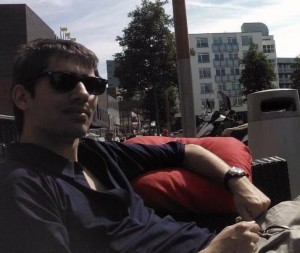 What do you do at Triangle Studios?
I am a programmer, I’ve made games for the DS, Wii, and now the iPhone and iPad.

What education did you have?
I’ve studied Hogere Informatica at Windesheim.

Why are you working in the gamesindustry?
I’ve been making computer games since I was 10 years old, writing games in basic on my dad’s old XT computer. Later on I upgraded briefly to Visual Basic (yuck!) and then moved on to C++, which is where I really learned how to program.

What are your favorite games?
Phew, this is a hard question to answer, because I love so many games. Games like Civilization, Command & Conquer, Red Alert, Super Mario Bros 3, the original Legend of Zelda, and many others got me through my younger days. I learned how to program making Half-Life mods, so Half-Life is very high on my list of great memories too. More recently, I mostly enjoy co-op games, Left 4 Dead, Saints Row 2, and Borderlands for example. I’ve also played a lot of MMORPGs, but my favourite two are Dark Age of Camelot (played for 5 years) and EVE Online (played for 4 years).

What’s the worst game you ever played?
The worst game? This question might even be harder to answer.. There are so many bad games out there. And even really bad games can be great if they support co-op play. Like Kane & Lynch 2, if I would have had to play it solo I would never have finished it, but playing it co-op with my brother meant 5 hours of hilarity!

If you could play one game again for the first time, what game would it be?
Valkyria Chronicles. The first (and only) game for which I bought DLC, I loved the story, gameplay, setting and atmosphere. I am eternally disappointed that VC2 and 3 are PSP titles :(

Best movies ever?
Anything with explosions, really.

Favorite music?
As long as it’s not rap, R&B, or Dutch there’s a good chance I might enjoy it.

Any other hobbies?
I have been a member of a local rifle range for about 10 years now. Also, I play the bass guitar (poorly). And I like to go travelling as well!

You’re walking through the forest when a magical fairy appears in front of you. She grants you the superpower of your choosing. What shall it be?
My exact description would be so complicated I’d have to have her read my mind, or spend a good while describing everything in order to be accurate, non-ambiguous and complete. There will be no trolling me with “Oh should have mentioned that before!”. Writing it down here would probably break the page layout ;)