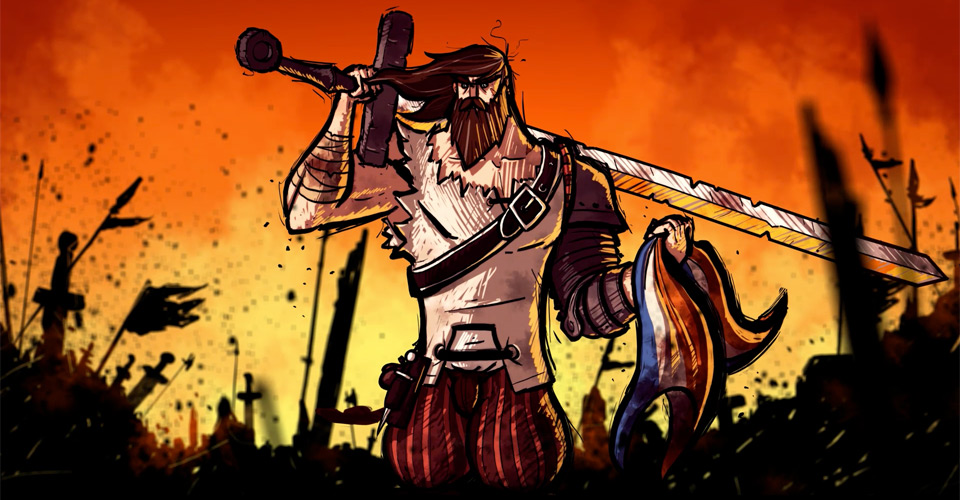 About Cross of the Dutchman

Cross of the Dutchman is an action adventure game based on the true story of the folk legend ‘Pier Gerlofs Donia‘.

The story takes place in medieval Western Europe, in the province of Frisia, near the turn of the 16th century. Though Pier and his family lived in peace, the world around them was changing for the worse. Saxon legions were invading nearby villages, making the lives of the native people next to impossible. On one faithful day, Pier got involved with the Saxon oppressors, escalating the situation for the worse. The events portrayed in this great adventure caused Pier to gather a band of farmers and form a front against the oppressors. The acts that followed made Pier into the legend he is known for, the Cross of the Dutchman.

Documented History
Triangle Studios was very thorough when it comes to researching the world of Cross of the Dutchman. We have collected historical articles, visited towns and gathered as much information as we could in order to portray the world of our hero in the best way possible.

In Cross of the Dutchman, you play as Pier, the farmer who turned into the commander of a Frisian army, an example for all people who were oppressed by the Saxon invaders. While leading the rebellion you will get to meet and befriend historical characters and let them join your cause for freedom!

You will explore the Frisian landscape as it was during the 16th century and experience first hand how people struggled to survive during these times of conflict. Travel to villages, farms, forests and other landmarks and collect and find the treasures and gold that is hidden all over Frisia.

Lead by example with your formidable sword which inspires fear and respect with even the toughest of enemies. The legend says that Pier was able to cut down multiple Saxon mercenaries with a single blow! (The sword is nowadays displayed in a museum in the Netherlands)

During the game, you will be able to help Pier by improving his abilities and making him even more powerful. Using your sword and fists you will make your enemies tremble!

Once we get Greenlit we are going to include all major Steam features in Cross of the Dutchman:

In addition to the these features we will offer bonus material that allows you to enjoy Cross of the Dutchman even more! We will include the following items in our package:

Soundtrack – Get consumed by medieval music
Stefan Kuizenga, our producer and composer has composed an incredible soundtrack that will be made available for you in high quality MP3 format! You will be able to enjoy medieval themed music that has been influenced by these grim times.

Papercraft – craft your own legend.
Always wanted to pose a legend on your desk or TV? Here is your chance! You will be able to print out a model of Pier and customize it any way you want. Trust us, it’s pretty cool!

Artbook & Project Timeline – Get a deeper look into the project
You will also receive an art book containing photographs and images of all the actual locations and interesting objects that were used while creating this project! On top of that, you will receive a visual representation of our entire project timeline, starting from the very inception of the game all the way to its release.