<Remco>
It’s been close to two and a half years, yet it doesn’t seem like that long ago since Bram was an intern at Triangle Studios. He’s currently finishing his degree and has reached out to about writing an article for us about his experience with the project and the demo. Thanks for sharing your thoughts with us, Bram! We expect to see you again at the launch party in September :-)
</Remco>

Some of you might remember me. A few years ago I was an intern at Triangle Studio with ‘the community’ as my primary task. I mainly wrote for this blog to keep you guys up-to-date, posted on the forum and took care of the social media channels. I also represented the studio at a few events and worked on matters related to the book of Cross of the Dutchman. I had a great at the studio, but I always regretted that the game didn’t release during the time I was working there. But now, finally, there’s news of the release for Cross of the Dutchman and I felt like writing once again for this blog! I contacted Remco and asked if he had a recent demo version of the game laying around for me to play and write about. And sure enough, he did!

It has been a long time since I last played the game and the version I remember best is the old demo that was playable on Indigo 2012. That’s quite some time ago! With Cross of the Dutchman being Greenlit on Steam, I’ve been comparing the two versions of the demo. Maybe I’m a bit biased, since I worked as an intern at Triangle Studios for six months, but I’d like to share a few of my thoughts with you guys! 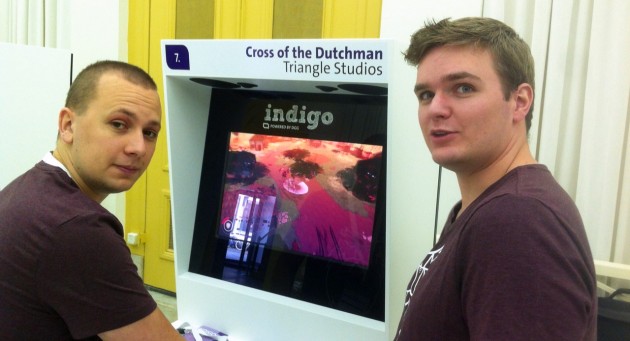 Steven (L) and Bram (R) playing the old version of Cross of the Dutchman at Indigo 2012.

First things first: the graphics. Of course, people always say the gameplay matters most, but when starting up a game, the graphics are the first thing you see, so I’ll start with that. The first demo used the old 3D model of our hero, Pier. The new demo uses a new model of Pier. And not only Pier has improved, almost everything on the screen looks better as well! From the dirt on the ground to the villages and the high trees surrounding them, everything looks a lot more detailed. Also the effects, like breaking a crate in search for loot, or the rippling of the water, have improved.

And of course, there’s the gameplay. Pier’s primary attack is a fast one, which isn’t very strong, but can be used to throw punches and strikes around quickly. But he soon learns to focus his anger into a mighty devastating blow, which can send, if aimed right, enemies flying across the screen! There’s also a big change in the camera perspective. The camera used to be free for the player to control, but this is changed into a fixed camera view. My experience with letting random people play the game on events makes me really support this decision. The free camera caused many people to lose their sense of direction, which doesn’t happen when the camera is fixed. It didn’t really offer any advantage, and I can imagine that with a fixed camera the team can focus more on making the game look great from a certain direction. All in all, it makes playing the game feel a lot more smooth.

Then there are the maps. They’ve gotten way bigger! Not that I ever heard someone complain about the maps in the old version, but the difference in size is enormous (ba dum tss!). Even though many parts of the terrain were closed off for the demo, it looks like there’s a lot to explore out there, and now there’s loot and treasure hidden everywhere. And that’s a good thing, because I bet upgrading Great Pier’s abilities doesn’t come cheap!

Another new thing is the conversation system. I remember there used to be some text pop-ups telling you to ‘go there’ or ‘kill those guys’, but it looks like the game now uses a real dialog system. And you’re not just talking to a few key characters. In the demo I could ask every random villager I encountered for directions when I got a bit lost! 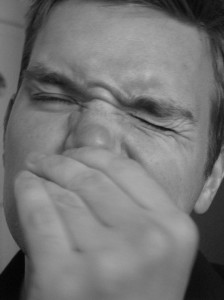 The Iconic Bram-vatar that will undoubtedly give you fond memories.

There’s one last thing I want to mention and that’s the music in the game. I loved the track that Stefan composed for the early demo, he really has outdone himself. The music has a great vibe and suits the medieval setting of the game perfectly, without sounding old-fashioned. While I’m writing this I even have the game running in the background to hear the music and the environmental sounds. I love it!

Playing the new demo made me very enthusiastic  for the final game! And the incredible success on Steam Greenlight makes me believe you guys are excited as well. I’m really looking forward to it and when the game launches, I’ll be hitting the forums to talk about it with you. If you have any questions before that time, leave them down here in the comments and I’ll see if I can answer them!