Out with the old …

Don’t act so suprised. We always deliver on our promises (even if they are a couple of months late sometimes …). So here’s another update! And what a good time to take a better look at our hero, Grutte Pier!

Look at that old guy, standing on the left. All pale and without detail. Now look at that handsome fellow on the right. Much better isnt it? Pascal was able to work his magic even better than before thanks to a little tool called 3D Coat. With it, he is able to have much more control of the texture and where he’s able to put the details. In the model on the left, the texture was painted separately from the model, making it much more difficult to get the desired quality.`

Admittedly, there is a lot of detail in the character that will not be immediately visible from the high-camera angle we’re using in the game, but the improved detail does show and that only adds to the quality. Needless to say, a lot of characters (as well as props and buildings) have been getting the same treatment. Because of 3D Coat, we’re able to add shadows (look carefully) into the texture itself, making it much more refined when you look at it on the screen. 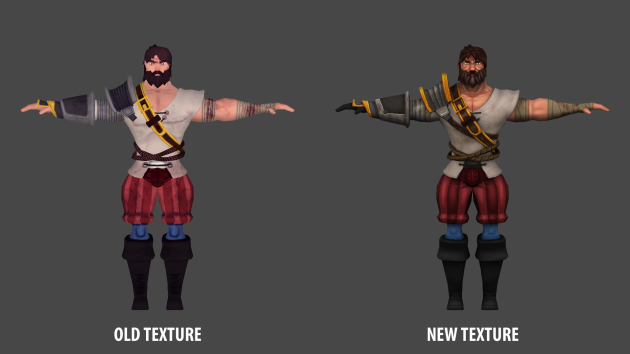