CotD novel to be released next week

Finally some good news for those of you who are waiting to get their hands on the Cross of the Dutchman novel: we’ve got a date for you! Better mark your calendar, because starting from Saturday November 17th the long-awaited book is available! The Frisian title is Grutte Pier: Krús fan de Hollanner . You can order it online and have it conveniently delivered at your home (or any address you want of course) or pick it up yourself at one of the major bookstores in Friesland. Note that this first batch is only the Frisian version of the story, we’re working on the Dutch and English translations as we speak.

Do you really want this book but doesn’t your bank account allow you to buy one? Maybe you’re in luck. Readers of the daily newspaper Leeuwarder Courant will get a chance to win a copy, so keep an eye on your newspaper on Saturday November 17th!

The book Grutte Pier: Krús fan de Hollanner (Cross of the Dutchman) is a collaboration between Triangle Studios, author Ate Grypstra and book publisher Afûk. It follows Wijerd Jelckama, who sheds new light on the life of his uncle Pier Gerlofs Donia. You get to know how a simple farmer could raise an army and become a fleet commander. He became the fear of the Zuiderzee, the captain of death, and the Cross of the Dutchman. He became no one less then Great Pier…

Pre-orders of the Frisian version of the book are expected to be shipped on November 12th. 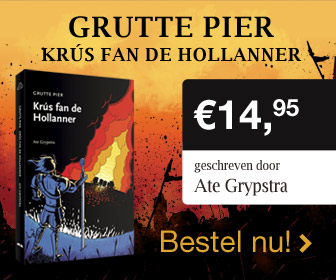 5 Comments on “CotD novel to be released next week”