Welcome to the second part of Making the Demo. This time we will elaborate on some things we’ve talked about in the first part of this series, and also introduce some new ones. 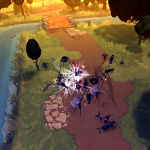 Last time we explained why the demo will start in the town of Arum instead of Kimswerd. Maybe you we’re wondering if that means that Arum will be the only location you will play in during the demo? Well it’s not, there’s more! In the demo you will be visiting no less than three locations! Each level is used to show different aspects of the gameplay. The first map will serve as a tutorial level. After that, in the second one the player is free to fight those Dutchmen in any way he sees fit. On the third and final map the pressure really gets on as this will be a timed level, so hurry up! 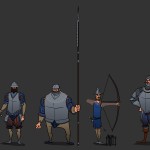 Swordsman, Pikeman, Bowman and an Officer

Since the demo will heavily focus on fighting, Pier will encounter his fair share of enemies. As you may have seen in our Character profile series there is a multitude of enemy types. The demo will introduce these different types progressively so you won’t have to face that powerful officer right at he beginning. An important feature introduced in the demo is the commanding of your allies. Do you want your troops to follow you and focus on defending Pier? Just give the order and they will. Or would you like them to charge in and attack everybody in their way? Just point them in the right direction and they will start looking for someone to kill.

It has always been our wish to give the player the feeling that Pier is the most important warrior in any battle. On the battlefield there’s a lot going on with men fighting everywhere, but we still wanted Great Pier to be the decisive factor. In order to achieve this we’ve come up with a nifty mechanic. We call it the Battlesphere system. The easiest way to explain it is to imagine a big sphere, with Pier in the middle of it. Allies and enemies within this sphere can be hurt or killed, but at the outside of the sphere they cannot. This way there’s always fighting going on, but to actually win a battle the player must make sure he helps everyone out. It always makes for an epic feeling, seeing all that fighting going on everywhere, all the time!

So what about the fighting itself, what can you actually do? As you probably noticed in our previous Making the Demo article you have two types of attack. Using a light attack includes stepping a bit forward, while with the heavy attack Pier will stand his ground and delivers a devastating blow that will send lighter enemies flying. Combine these two attack types and use them to your advantage! Every situation asks for a different approach so make sure to find out the best tactic for every type of enemy. Coming out on top in a battle will result in an encouraging cheer from your allies. 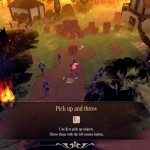 I spy with my little eye… A big pile of crates!

But why would you restrict yourself to fighting with just your sword? Why not using your surroundings to your advantage? Pier will be able to pick up and all kinds of elements from his environment like crates and barrels and even the bodies of soldiers that have fallen in battle, only to hurl them at his enemies with devastating power. A great way to thin out their formations from a distance!

Like what you’re hearing about the combat so far? Let us know in the comments!