Making the demo, part one

Hi, welcome to the first part of a new series that will be solely about the demo! We know that you of course haven’t played the demo yet, but we have. Extensively… So in this mini-series we will talk a bit more about what you can expect when playing the demo. In this first episode we’ll talk about the necessary corners we had to cut to make the demo work on itself without the players having too much knowledge about the story beforehand. 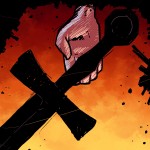 First up is Great Piers famous sword. This formidable weapon is probably Piers most important trademark, letting him hack away at hordes of Dutch soldiers. At the beginning of the events in Cross of the Dutchman, Pier is leading a pleasant and happy life with his wife and children as a noble farmer. At that time Pier had no need for a sword, so he didn’t have his unique weapon yet. In the demo you will notice that you have the big sword from the start. We’ve decided to give the player this characteristic weapon to make the demo resemble the experience of the full game as much as we can. 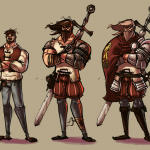 That’s not all we had to change about our heroic main character. We have actually changed his whole appearance! The character model you’ll play with is the one you will use throughout most of the full game. This means it’s also the most memorable for most people.  At the time of the events in the demo however, Pier isn’t a warrior so, despite being extremely tall and strong, he doesn’t look like one. But in the demo, fighting is what you do the most so we’ve decided to go with the warrior-looking Pier model. 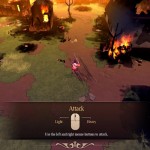 Another thing we had to change for the demo was the tutorial. For the full game we try our best to weave the tutorial trough the regular gameplay as slick as possible, but with demo this isn’t possible. Our wish with the demo was to throw the player right into the action as fast as possible. In a big game you can take your time for things like a tutorial, but with an action-oriented demo you just don’t have that time. Basically what we’re saying is: “Here’s what you need to do, and this is how you do it. Have fun!” 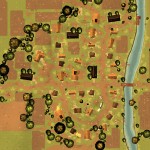 The final important change we’ve made for the demo is the location. If you’re familiar with the story of Great Pier you know that he isn’t really involved with the things that are happening in his land until his wife and children are murdered and his farm is burned down. You’d also know that this farm is located in the town of Kimswerd. Our initial plan was to let the demo start there.  Unfortunately the map of Kimswerd wasn’t ready yet so we had to use a substitute. We had some other maps however and the one for Arum was looking really great so we decided to use that one instead. Luckily for us this doesn’t break the storyline too much since Piers farm was located right between these two villages!

That concludes our first part of this series. Can you live with the changes we’ve made to the demo? Let us know in the comments!

6 Comments on “Making the demo, part one”