We’ve got some great news for you today. We are very pleased to announce the team has started a new development sprint! Remember the last one? That went really well and we made a lot of progress. Now, this September we are doing another sprint.  This time with an ambitious goal: finishing a demo!

We’ll be working hard this September to present you with a working demo by the end of the month. We have a lot to do so it will be a busy month for all of us. What the demo will be all about has already been planned out, but everything else will need work. We’re working hard on programming, graphics, gameplay mechanics, animations, sounds and music and all the other things that are needed to release a good quality demo. The mission in the demo will be set a bit after the start of the game and will be focusing on the way how the combatsystem will  work.

Releasing a demo prior to releasing the full game is very important to draw some new attention to the game. Doing the Kickstarter  campaign in May was a great way to achieve this, but now it’s time to do something new. Releasing a demo will give our audience a great idea about what they can expect when the complete game is ready. Think of it as a showcase of what we are capable of.

We’ll be making frequent updates to the blog so keep checking back!

And here are some pictures of the guys in action: 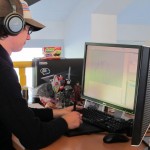 Pascal working on a cutscene 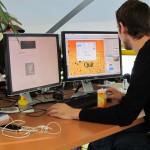 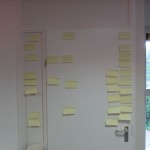 Sticky notes for keeping track of the project. Idle, Progress and Done. Many notes at Done, still much to do! 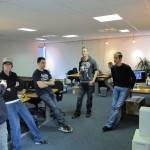 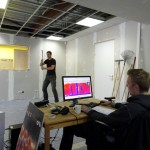 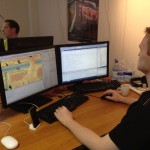 Frank programming everything together