Cross of the Dutchman in the news

Since the end of our Kickstarter campaign, we received quite a lot of media attention. Not only from websites or blogs, but also from television, newspapers and magazines. Because it’s fun to read about our coverage, we’ve put the most remarkable in this article, we hope you like it!

Een Vandaag
Just yesterday evening, Dutch television program Een Vandaag made an item about the sword of Grutte Pier. For the first time in history, the sword will be moved from the Frisian Museum, to an exposition about Pirates in Rotterdam. You can find more information about this in: Picture of the week #20.

Jeugd Journaal
Grutte Pier’s sword was pretty big news in the Netherlands and the childrens’ news program also made an item about it. Although they didn’t mention anything about the game, which is weird because what kid doesn’t like videogames? They did however used our art, LOL :). 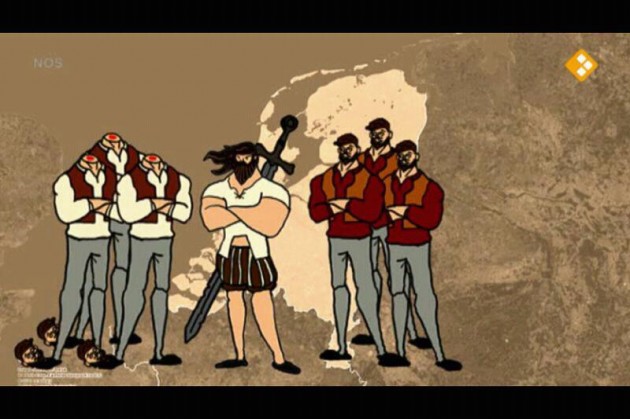 Click here to see our drawings of Pier in action (starts around 5.30).

ZDF Kultur
German television ZDF Kultur featured an item about Kickstarter, and used Cross of the Dutchman as an example project. They also interviewed Remco about the project. The complete broadcast can be seen here: ZDF Kultur (Our part start around 14.00).

Power Unlimited
One of the most popular games magazines in the BENELUX features Dutch developers every couple of issues. This time, it was Triangle’s turn to let the people know who we are and what kind of games we make. The next issue of the magazine will have a two page spread about Triangle Studios and Cross of the Dutchman. It’s definitely something to look forward to! The magazine will be available in stores soon.

Fok! Games
The hugely popular Dutch website FOK! has been reporting about Cross of the Dutchman since the very first announcement of the game. More recently, one of the editors Wesley Akkerman contacted us for an in-depth interview about Kickstarter and Cross of the Dutchman. Read the entire article right here.