The release of the teaser trailer has brought a lot of attention to our game Cross of the Dutchman. Since it has been more then two weeks, let’s have a look at what strategies we’ve used to spread the news and how the responses of the viewers have been so far. We came up with several strategies to distribute the teaser across the internet.

First, we revealed it on our website. Second, we put it on Youtube. Third, we sent out a press release to specific selected parties. Fourth, we submitted it to a gamespress.com, which helps spread the word to all individual games websites. Fifth, we sent out a newsletter. Sixth, we uploaded it manually to websites like IndieDB.com. And finally, we monitored traffic and responses and reacted to it in order to keep discussions alive.

Let’s see what the numbers tell us. We received an all time high 608 visitors on the day of release on our site. Our own YouTube video got 2811 views, but was surpassed by a clone with 8750 views. GameTrailers.com served 6962 impressions. Which brings the total around 20K views, including views from some other minor websites.

The reactions on the teaser were largely positive. Among them were:

“The musical score is really fitting. Is this the next Skyrim we can expect? ;-)”

And many more, but you can’t satisfy everyone so we also received some sarcastic and hilarious reactions:

“About a farmer who can somehow afford a robotic arm even though hes just a farmer clearly in what looks to be a totilitarian government setting and somehow a bunch of skinny farmers get led into combat already had swords and ready made boats at their dispense in case this guys house ever burnt down and im sure the poor farmer dutchmans robot arm is going to somehow be able to turn into like a gun or laser beam. Wow..” 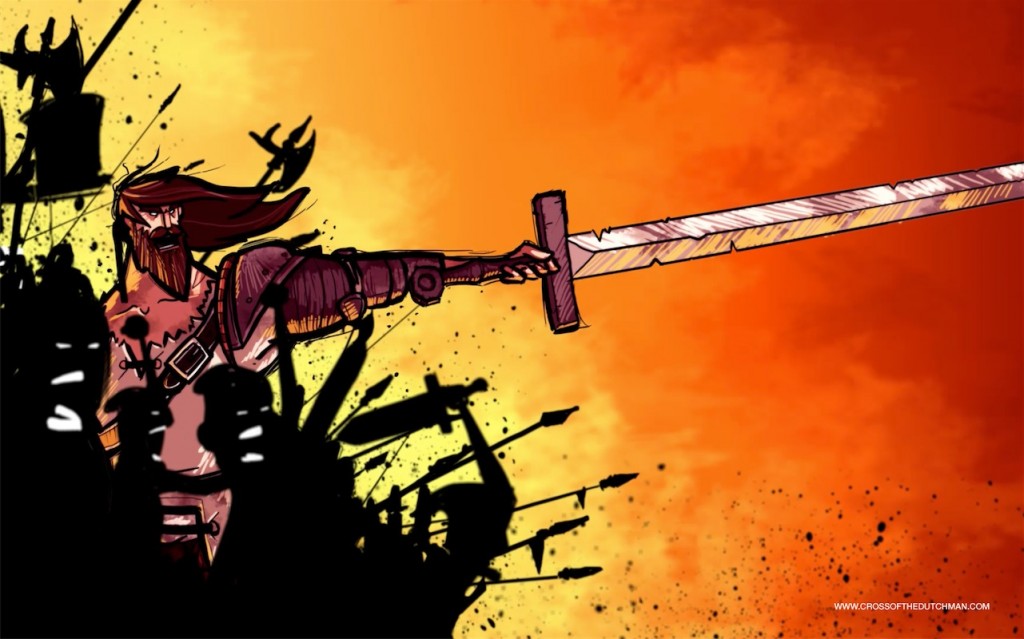 Grutte Pier and his robot arm.

Some viewers stated in the comments at gametrailers.com that the name was wrong or misleading as Grutte Pier was not a Dutchman. Which is correct, he was a Frisian. To clear the story up. When Grutte Pier captured and sank 28 Dutch ships on the Zuider zee, it were the Dutch who gave him the nick name Cross (or grave) of the Dutchman. This is also where we found the title for our game.

Despite some less positive reactions we consider the overall reception as very good! It inspires us, but also puts a bit more pressure on us to preform and deliver a great game. Which is good I guess :)