Everyone is familiar with famous sayings or phrases. They can have a famous source, but just as often they have no source at all. Some have been told for ages and were passed down from generation to generation while others are fairly new. Who for instance doesn’t remember the words of Martin Luther King: “I have a dream“?

A well known phrase in Friesland was: “Leaver dea as slaef“, which translates to: “Rather dead than enslaved”. A phrase which is likely to have a similar saying in other languages of oppressed people. In this case, it can be traced back to the battle of Warns in 1345, approximately two centuries before the birth of Pier Gerlofs Donia. 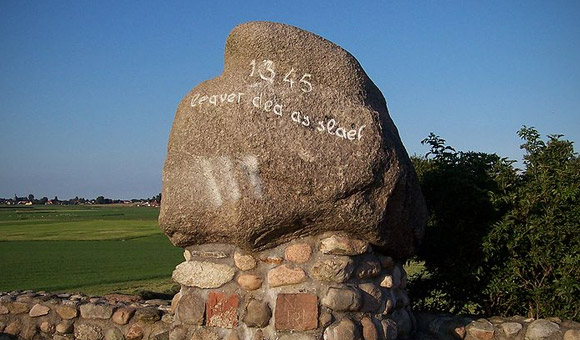 On september 26th, 1345 count Willem IV and Jan van Henegouwen – the duke of Beaumont – set sail with their fleet from holland across the Zuiderzee to Friesland in order to invigorate their power over the frisians. Before they set foot on frisian soil they split up to have a strategic advantage. It was intended that both groups would join each other at a later point. Several surprise attacks from the frisians prevent this. It was told that more then 1800 people were killed in this attack,  among them was Willem IV. The remaining soldiers fled back to holland. The victory strengthened the frisian freedom feelings and this was reinforced with a saying: “Leaver dea as slaef”, and later with a  monument.

We personally like the saying because it plays an important role in the Frisian freedom movement for which Grutte Pier also fought. Although the phrase is often wrongly attributed to Pier, it is likely that he used it for his own cause as well.