The voice of Pier #2 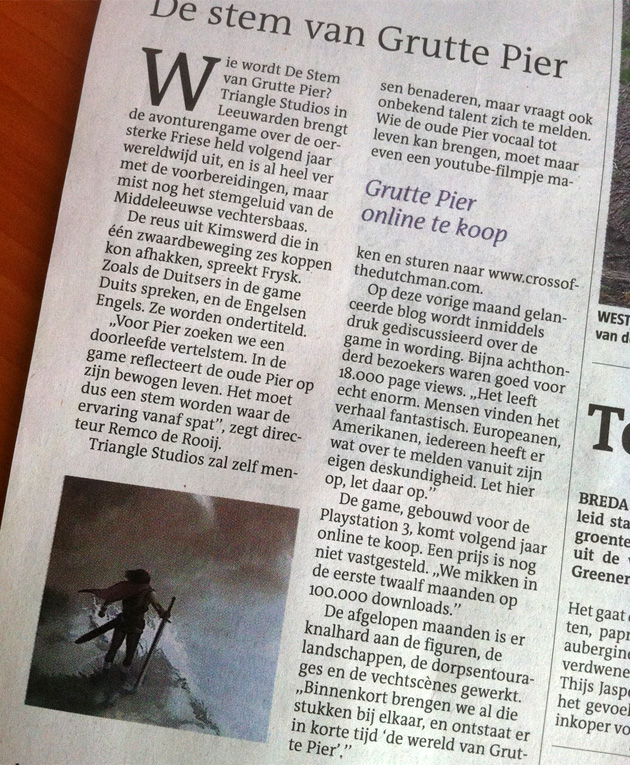 This morning we got a call from the local newspaper, the Leeuwarden Courant. They heard about the voice of Pier article because of a tweet we sent out yesterday. Remco did a short interview with them over the phone. Talking about the project in general, but also about the Frisian voice acting that we’re planning to do. They asked us if we already had someone in mind for the voice of Pier. And to be honest we have some names in mind to do Pier’s voice, but we’ll not reveal them just yet. For the most important reason that we haven’t approached anyone on that list. On the other hand we thought it would be fun to call out for unknown talent, and see what they have to offer in their role as Pier’s voice. And before we knew it we had an article in their newspaper, which was released early this afternoon.

So let’s make this official. We hereby call for the voice of Pier! Anyone who thinks he (or she) is the right person to represents Pier’s somewhat aged and worn Frisian voice can send us a video or audio link with your entry. Of course there are some rules that will help improve your chances:

Because we want everyone to have an equal chance, we’ve taken an excerpt from CotD’s dialogue that you can use for your audition. Good luck!

VOICE-OVER PIER (unverified and not final text, own interpretations are allowed)

“frede, in soad minsken sykje it, mar de measte sille it nea fine. Oait tocht ik dat ik it hie.”
“Peace, so many people search it, though so little truly know what it is. I once thought I knew.”