Ah, finally. An article about the development of CotD! We’ve been looking forward to these articles for quite a while now, but we also know that we can only make one first impression. The main reason for us showing mostly concept art and not too much about the game (if anything …) is mostly due to the fact that we’re still tweaking all sorts of stuff about the games’ appearance. The images we’re using in this article are all programmer-art, and do not have any final assets (at all!).

So, I wanted to talk a bit about the battles that will take place in CotD. Pier and his men will go against groups of enemies both small and large. We need to make sure that these battles are always interesting to play, and to look at. 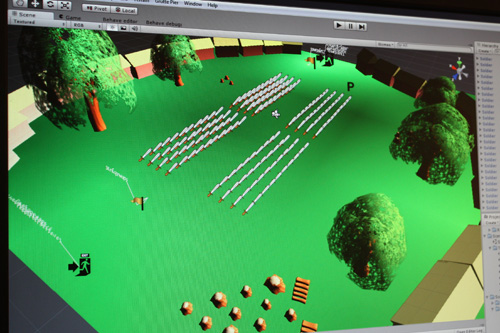 The very first prototype we built (many moons ago) showed a group of cylinders running up to each other and doing damage. No animations, and no smart behavior either. We weren’t really proving anything other than it looks pretty cool to see a two large groups of cylinders running into each other and falling over every now and then (meaning they were killed). It created funny situations where one NPC was swamped by 20 enemies, and where other NPCs were completely ignoring being stabbed in the back by other enemies. We added a couple of rules that completely changed the way the battles felt;

Pick your battles – Enemies would choose to team up against stronger enemies, or run away when outnumbered.
Evade & Defend – Enemies would use their shield to defend themselves from critical blows, or simply dodge attacks.
Know your place – Don’t let all the enemies gang up on Pier, but make sure the player gets enough space to move around.
Ranks – Create different types of enemies, that behave in a different way. 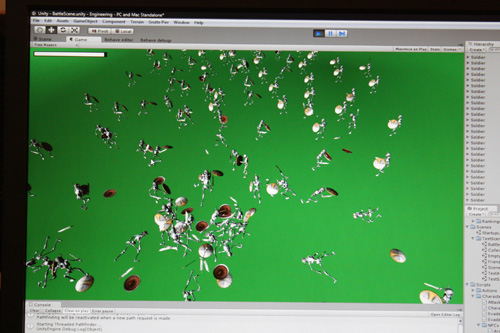 Enemies are spreading out nicely, creating a realistic feeling for the battle.

These changes caused the prototype to feel pretty damn realistic all of the sudden! We still had too many NPC’s clustering together and standing idle when no enemy was in sight, but that was all something we would be able to improve. Over the course of a couple of iterations, we tweaked the system to perfection. We are now able to design levels very quickly, and create realistic (and very cool looking) battles for CotD!