The Legend of Grutte Pier

When people tell a story, they tend to give it their own ‘twist’, tell it a bit more like they imagine it, or how they wanted it to be. This keeps storytelling interesting most of the times, but is considered ‘bad news’ when you’re trying to get to the facts behind a story. Especially with a Folk Legend of Grutte Pier, there is always a part of the story that is true, and a part that is glorified to make the story worth telling to the next generation.

When people in Friesland discuss the story of Grutte Pier, they will try to ‘match’ facts to see how much their version of the story people agree with. This we noticed when we announced the development of Cross of the Dutchman, and we started receiving emails on the subject;

I would like to tell you that Piers’ sword in reality was never wielded by Pier Gerlofs Donia (Grutte Pier). He got the sword by pillaging his opoonents, and an average swordfigter would never be able to use a sword of that size!

Above is just one example of an enthusiast, but many more emails came in asking about details we would be using, or about confirming our approach for dealing with issues like battles or missions Pier would have done. Examples of these details are: Pier striking down five men with one blow, Pier being able to lift an adult horse on his shoulders, Pier being big as a house, Pier holding the great sword with just one hand, and Pier being untouchable in battles. The story of Grutte Pier is one still told by many people, and therefore we wanted to contribute as well; by telling our version of the story. 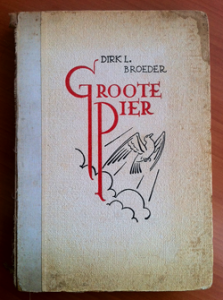 Fortunately, we were not the first to write the story of Grutte Pier. A number of authors have been using the legend for their own books, and Pier has turned up both as an ally and as an enemy in movies and TV shows. The Dutch TV show Floris (1969) is the most popular portrayal of Lange (Tall) Pier: A brute, a pirate and a thief. Other characters from Piers’ legend like Maarten van Rossum are also featured in Floris, but the show never intended to portray accurate history, and was pure entertainment.

When researching the legend of Grutte Pier, we used different books such as Grote Pier Van Kimswerd by J.J. Kalma and Groote Pier by Dirk L. Broeder. The first book is by far the most factual, and reveals a timeline of Piers’ quests and hardships. We have used this timeline for our own version of Piers’ story, and added elements we found by more recent research about recorded information on battles from that time.

One of our most important sources of information was given by the elders of Kimswerd. Three men were so kind to give us a grand tour of the village, and tell us all they knew about Pier, his battles and the customs of the people in medieval Frisia. We will feature an interview with the elders in our next article on the Legend of Grutte Pier!

3 Comments on “The Legend of Grutte Pier”