“Grutte” Pier Gerlofs Donia
The main character in Cross of the Dutchman. The man who decided to take up arms for the Frisian people after a band of Saxon mercenaries burned down his beloved village Kimswerd and killed his wife. He was well known for the huge sword he wielded in battles. Because of his size and strength, people called him Grutte (Great) Pier. After fighting the Dutchmen for four years and causing some tremendous losses on their side, he retired after fighting in the battle at Emmerich.

Rintsje Piers
Pier’s wife, a stubborn, but loving woman. Her original surname was ‘Syrtsema’. Very little is known about her, except for that she died in 1515. Pier loved her, and her death brought him much grief, but even more anger.

Maarten van Rossum
Maarten is a Guelderian commander. He forms an alliance with Pier during the story of CotD. Though not the main commander of the Guelderian forces, he was known for his experience and a feared commander. Though he disapproves on some of Pier’s ways, he does see him as a reliable brother-in-arms. 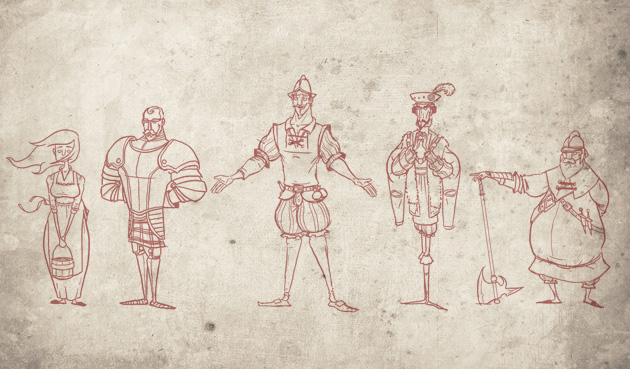 From left to right: Rintsje, Maarten, Wyerd, Karel and Wybe

Wyerd Jelckama
Pier’s good friend, who looks a lot like Pier himself. After Pier took up arms, Wyerd decided to join him. Though instead of the Frisian freedom, money was one of his major interests for joining Pier. People would eventually even call him Great Wyerd. Unlike Pier, he didn’t have as much charisma and was not as successful in leading the rebels after Pier retired.

Karel van Gelre
He ruled over Guelders (Gelre), and provided finances and men for Pier’s ‘army’. He is a cunning and smart man, often fooling people with pretty, but empty words. He seems to be noble and honest, but is no better than all the other selfish lords around the Netherlands.

Wybe
Wybe, a war veteran, is the man who started gathering men for the rebellion in the first place, though at his age he isn’t worth what he used to be. He seems to have experienced some dark times and events, or at least his dark humor makes you think so. For him Pier is a man to trust, a man who fuels his hope for better times, but also a man who has seen the death of innocents and people dear to him, like he has. Pier is his reflection of the past.

4 Comments on “Introducing the Cast”