This is an article I’ve been looking forward to personally. One of the biggest issues we faced when writing the story of Pier, is how we would portray him. Would he be a savior and liberator of his people? Or would he be a brute, a pirate and a vigilante who only cared about his personal gain? As it turned out, the truth lies somewhere in between.

The truth behind the story of Grutte Pier is scattered over many different documents, reports and stories. On the one hand, there is the story about how Pier defeated his enemies, and gave back the land to the Frisians. This story is the one told most in books and schools, simply because it’s glorifying a legend and it makes the people proud of their heritage. On the other hand, the stories tell about a man who was a mercenary and fought for whoever was paying him that day. Turning against yesterday’s friends was supposedly something that Pier and his “Black Band” did not have any problems with. 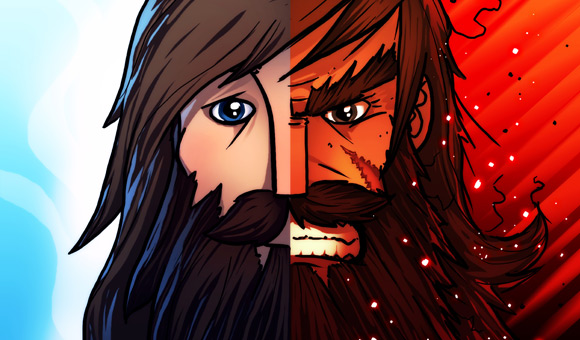 Both extremes are likely to be partially true, simply because there are two origins of the stories. The one is from the people who actually were liberated by Pier and his Band, and the other by villages who fell victim to the battles taking place. Our take on the subject would not be choosing whether or not Pier would be good or bad, but rather how to display the conflict that was raging from within Pier himself. We chose to tell the story about a husband who loses his wife, a man who had lost his reason for existing, and the man who took up the challenge of getting revenge for the crimes that were done to him. What he would not know, is that his actions from that moment on would define the legend that we now know as Grutte Pier Donia.

On his quest, Pier encounters many challenges of which the outcome should determine how the people could have seen Pier. Will the player cause chaos and destruction on his path, or will he spare the villagers and take out the enemy when the innocent are out of harms’ way? In a way, we hope to create a feeling of responsibility when our audience plays Cross of the Dutchman. The way in which you play the game will make you see how a person can turn into a legend, or strike fear in the hearts of anyone who would stand against him.