Posted by Remco on Wednesday, September 7, 2011

The hero of our story, Great Pier (or Grutte Pier Donia like he was called in Frisia) was the kick-off of the design process for the game. We wanted to have an idea of what Pier would look like, and form the entire game world, including other main characters around him. From the get-go, it was clear that Pier needed to be a big guy. Not only was he a farmer, but the legend also spoke of Pier as a man who had the strenght of a horse! CotD’s Art Director, Pascal, had just started at Triangle when he was given the task to create the image that would be the starting point for the entire project. Below is a description of how Pier grew to be the character he is in the final product.

Pier’s initial facial designs were mostly a practice round for Pascal. He had just started at our company and needed to familiarize himself with his new collegues. The faces were created based on the extensive background research, but were proven to be too “scandinavian” for our tastes. We wanted Pier to resemble a person who had the ability to grow into a king for his peole. He would have noble traits, but more than anything, he needed to be able to ‘grow’ (physically) in the story. 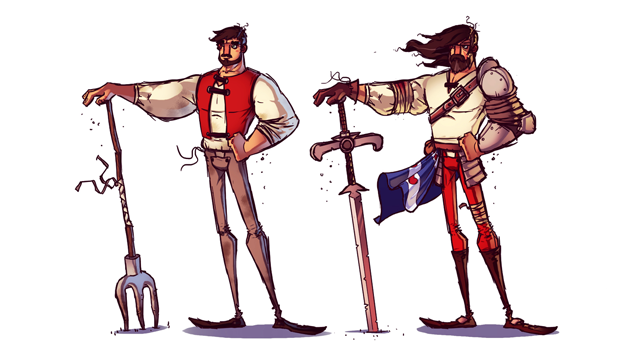 Our second attempt at creating our hero brought us much closer.

For the first revision, or second attempt at designing our hero, we tried to portray two versions. One where Pier is the farmer from before his personal tragedy, and one as the warrior who eventually lead his people to victory. The result was impressive. We could definitely tell that Pier had become a different person, but there were also parts we didn’t like. His sword needed to resemble the great sword he presumably used in battle, his clothes weren’t like they would have back then, and his armor made him look more like a Spaniard than a country boy from Frisia. In terms of his posture, we thought that Pier should be not only tall, but very strong. His legs were definitely too thin for someone who needed to resemble this, so we asked Pascal to go back to his drawing board, and come up with something new.

So, Pier went through a couple of phases. We had big pier, skinny pier, muscular Pier and a couple of others that really helped us decide what we liked about the character and what we didn’t. In the end, we had to choose for one single character that would fit the enitre story, and show our audience that Pier would grow into a hero. What we decided on is the version you can see below. A big, strong but happy farmer, growing into a fierce warrior, and eventually into a king for his people. A noble man who fought many battles for his cause. 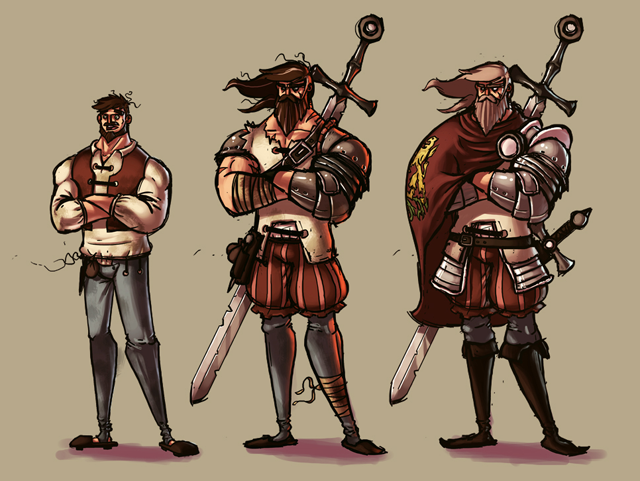 4 Comments on “Designing a Hero”