We are often asked the question “What type of game is Cross of the Dutchman going to be?” Well, to be honest, it took us some time to figure out as well, but in order to make an end to all speculation, this article will reveal what type of game CotD really is.

Many people expect the game to be purely violent. Gore to a degree that puts God of War to shame is probably something many of you would like to see. But, even though we love the greek demigod portrayed in that game, we don’t think that Pier’s life story would be given a fair chance when we would focus on such explicit violence. 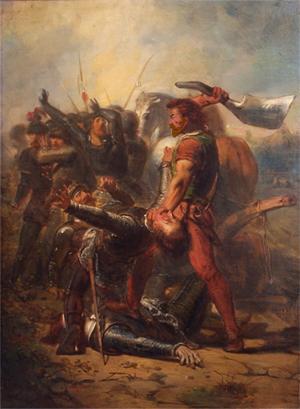 During the game, we will focus on Piers’ time as a warrior. Many of you will have read the previous articles, but in short, it comes down to this: Around the turn of the 16th century, there was a constant struggle between different groups in Frisia. Pier Donia got involved when the village of Arum and Kimswerd were attacked and burned to the ground. His wife along with many other villagers were murdered in the attack, leaving Pier and just a couple of farmers who were able to flee from battle to return to their destroyed homes. After this event, Pier formed a band of warriors who would support him in his quest to defeat the ones who murdered his family and friends. From that moment, Pier would travel the lands and drive out any opposing forces he would encounter, leaving villages and even cities liberated from the oppressors.

Many genres would fit with this kind of story, but in our opinion, we wanted to focus mostly on the battles that took place. This made us choose the Action and Adventure genre for CotD. Of course, this is still a very broad spectrum, but hear us out: Action is the primary and most important genre, because the player will be experiencing the battles as they took place in the 16th century. Many of the battles are documented, and gave us a great idea for how we would be able to implement a story line and have great action sequences at the same time! Secondly, there is Adventure. Obviously, Pier had a long struggle to achieve his goal, and will meet a lot of interesting characters during hist quest. The Adventure genre will allow Pier to explore and interact with these characters in order to experience the story to the fullest.

So what to compare Cross of the Dutchman with? Well we honestly believe that a story like the one of Pier has never been told in a videogame, and certainly not to a degree that we’re aiming for with the level of historical detail. We think that CotD will appeal to those who take an interest in Medieval history and folklore, but also to those who want to experience some intense battle scenes and feel the power of a true legend like Grutte Pier.

3 Comments on “Choosing the Genre”