An epic two years in the making (and counting) 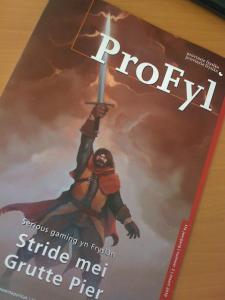 Pier was even featured on the cover of ProFyl, a magazine by the Province of Friesland.

As some of you may know, we first announced the development of Cross of the Dutchman way back in November 2009. This was actually just a couple of weeks after we came up with the initial idea of the game.  We wanted to set high expectations with the announced platform and release date (Q1 2011). So you might wonder; why is this game still in development after two years? It should have been done!

When we announced the game, we wanted to show the world that we are an ambitious company, ready to take on a big challenge. We had done projects before like at the time like Heron: Steam Machine, but what we dreamed of doing was the creation of a title that would be a pivotal project for Triangle Studios. One that would define the company, and give the world a story that only a handful of people have been exposed to. However, there were still loads of uncertanties such as the budget, the team and the game itself.

So, did we announce the game too soon? Well maybe, but it was also a great way of gauging the response of the audience to our idea. What we noticed is that the announcement received a lot of attention, and even over time, people would come up to us and ask about how the game was doing. This showed us that people are genuinely interested in what Cross of the Dutchman is, and want to know more about it. And it made us want to give it our best effort even more than before!

And yet, almost two years have passed since the announcement, what on earth have you been doing?!

Good question! After the announcement, we knew that we would have only one shot of making this game the best it can be. So we started doing research. Loads and loads of research. But even though the legend of Grutte Pier is based on true events, that does not mean that you instantly have an interesting story to build a game upon. So, with a lot of time and effort, we wrote our version of the story, created the game world, and built prototypes to prove our game play. All this was done while at the same time, we were still working on other games like WINtA, Muddy Monsters, Graffiti Wars, SalePlay and many more.

And now, finally, we think we’re ready to take on the job of developing Cross of the Dutchman. Over the past couple of months, the team has been preparing,  and we have been making many crucial decisions. We have expanded our team with people who will help us create the game from both a visual and a technological perspective. We’re excited to do this, and invite you, as our reader, to be part of this beautiful project as well!